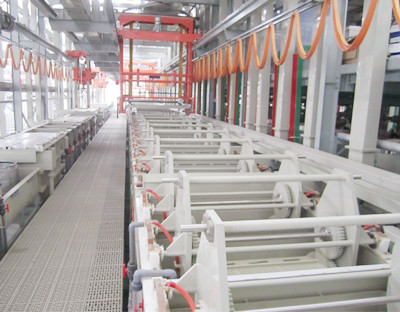 Tin plating and its alloy is a kind of coating with good weldability and certain corrosion resistance. It is widely used in electronic components and printed circuit boards. In addition to physical methods such as hot dip and spraying, electroplating, dipping and electroless plating have been widely used in industry because of their simplicity. 1) Can be switched freely between full automatic and semi-automatic
2) Adopting advanced world famous brand components in electric parts
3) Good quality PP plates for the tanks/baths and superior Chinese SUS for main frames
4)With the using of touch screen for HMI to facilitate the control of the line.
5)The whole line is designed on the basis of advanced environmental protection concept

The main control body of the production line adopts Omron/PLC programmable program design controller imported from Japan. The system has strong function and fast speed, so as to ensure the high degree of automation, stable and reliable operation and comprehensive functions of the production line.

1) The system runs stably and reliably.Due to the selection of Omron/PLC, equipped with14 inch touch screen, imported (Schneider) control elements and special measures, the whole system has strong anti-interference ability and can operate stably for a long time without being affected by the surrounding industrial environment.

2) The system has two states of full-automatic and manual operation, which can realize the segmented manual control for each process.In case of failure in the full-automatic state, manual operation can be selected. After the failure is eliminated, the automatic operation can be restored, and the whole line will not be affected due to the failure of a station element, resulting in shutdown.

3) The imported Mitsubishi frequency converter from Japan is used for speed regulation, and the absolute address code is used for positioning, which is accurate (controlled within ± 2 mm);When running the program, it has self diagnosis function.

4) The system is equipped with a variety of software and hardware safety interlocks: to prevent faults such as out of limit translation, out of limit lifting, anti overlap, mutual collision and motor overload.

6) The production line is equipped with a manual operation box on the operation surface, which can realize manual / automatic conversion, system start / emergency stop, translation and lifting.

8) The production line can realize the flexible control of the whole line, optimize the users’ process and form a control program. The user can call it conveniently on the touch screen, and it is easy to master the programming method. Looking forward to providing you with satisfactory products and services.